We want you to survive your eliminator pool this NFL season so we’re giving our free survivor pool strategy all season. Our picks are based upon our data driven NFL predictions and power rankings.

There are easy steps to cut down your potential pick for your NFL survivor pool.  We take you through step-by-step to make the week 4 NFL Survivor Pool pick.

We’re 3-0 this season having taken the Bills (week 1), Raiders (week 2) and Packers (week 3).  The Raiders and Bills we predict to lose in week 4 so wouldn’t be considered this week.  The Packers are projected to win Thursday night but since we’ve used this this season, they’re out and leave us with 15 teams for week 4.

First we eliminate toss-up games.  That means we’re cutting the 1 point winners out of the list.  The Dolphins, Jets and Bucs are out.  We have 12 teams remaining.

Next we eliminate road teams.  I don’t like taking road teams to win in the NFL at all.  Just too risky when you need a win, go with a home team.

Eliminating predicted road winners, the Bengals (at Browns) and Saints (in London) are eliminated.  10 teams are remaining for our NFL week 4 survivor pool pick.

Next, I look for team that aren’t in our 20 of the power rankings.  The Arizona Cardinals (22nd) are out of consideration.

Then, I look for our predicted winners that are playing teams ranked in the top 16 and take them out of consideration.  This eliminates the Texans (vs. Titans), Vikings (vs. Lions), Ravens (vs. Steelers), Falcons (vs. Bills), Chargers (vs. Eagles), Broncos (vs. Raiders) and Chiefs (vs. Redskins).  Having knocked out seven teams, we only have 3 remaining. 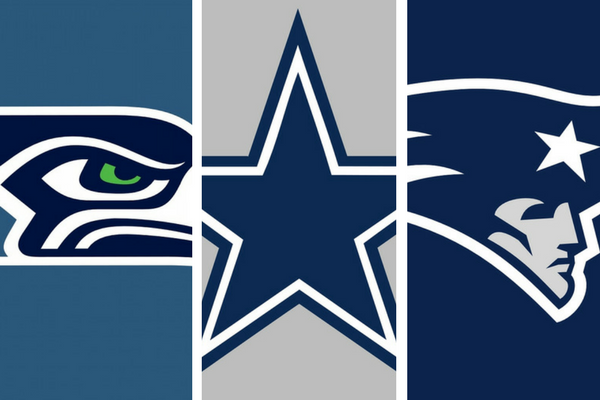 3 – Cowboys – Coming off a short week, the Cowboys host a Rams team coming off a win on Thursday night.  This game could be more competitive due to the team he team has to prepare so they’re the least confident of our final picks.

2 – Patriots (against Panthers) – The Pats defense continues to struggle.  The Panthers though showed they were vulnerable as the Saints shredded them at home last Sunday.  Tom Brady keeps it going for the Pats this week.

1 – Seahawks (against Colts) – The Seahawks are coming off a loss on the road while they host the Colts coming off a win.  The Seahawks know a drop to 1-3 make it another season of obstacles.  I look for this to be a blowout.   Take the Seahawks to survive NFL week 4.

Access our NFL survivor pool pick each week of the season.