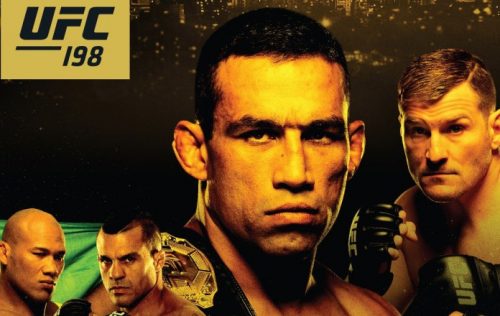 UFC 198 comes to us live tonight from Curitiba, Brazil on pay-per-view. The card is headlined by the UFC Heavyweight Champion, Fabricio Werdum, defending his belt against Stipe Miocic and the UFC debut of Christiane “Cyborg” Justino.

We’ve got predictions for all five main card fights. Let’s get to them:

Two Brazilian MMA legends face off in a bout that should have the crowd roaring. I give a slight edge on the ground and Belfort has the edge standing up. This one should be decided by conditioning.

I think Belfort’s BJJ is good enough to avoid the submission even from an elite grappler. I think he finds a way to get the fight back up to his feet and lands the shots to finish Jacare.

The Pick: Belfort via TKO

Cyborg makes her first trip to the Octagon tonight and will be looking for a statement win. Leslie Smith is fighting up in weight by 5 lbs against one of the strongest female competitors in MMA.

The big stage could slow Cyborg some but this one isn’t going to make it to round 3.

The Pick: Cyborg via TKO

These are two guys on opposite paths in the UFC. Shogun has had an impressive championship career but has been injured and the cage battles he’s had have left to many injuries.

Corey Anderson is an up and comer from season 19 of The Ultimate Fighter.   He’s got a lot of skills but not a lot of top-flight competition.

This one comes down to game plans. Can Anderson handle an experienced, championship level fighter like Shogun? Will Shogun land a punch that rocks Anderson?

This one should go the distance and I look for Anderson to push the pace and steal a decision over the MMA legend.

The Pick: Anderson via decision

Alves is a top UFC prospect and Barberena is coming off a solid win. These two get a showcase spot by being on the main card of UFC 198.

Barberena knocked off a top prospect, Sage Northcutt, in his last fight, and gets the undefeated Alves tonight. He’s going to have to neutralize Alves on the ground.

While I’d love to see a Bam Bam win , I think Alves’ superior submission game will be the difference in this fight. Alves stays undefeated.

The Pick: Alves by submission

This one is for the heavyweight championship. Stipe has been knocking people out on his way to challenge for the belt. Werdum is one of the most underrated fighters ever with wins over Cain Velasquez, Fedor Emilianenko and Alistair Overeem.

Stipe hasn’t been challenged by the likes of Werdum before and will look to keep this standing because if it goes to the ground, it’ll end quickly. Look for Werdum to be able to get it to the ground and win remain the UFC Heavyweight Champion.

The Pick: Werdum by decision