UFC 205 is live Saturday night on pay-per-view featuring the best card in UFC history.  The night is highlighted by a champion versus champion fight as Eddie Alvarez defends his 155 pound belt against 145 pound champion Conor McGregor.

12 fights happen at UFC 205 from Madison Square Garden in the first MMA event in New York.  Six fights on the main card, half for a title, and six undercard fights.  If you’re a fan of MMA, this is the must see event.  Get picks for all 12 fights below! 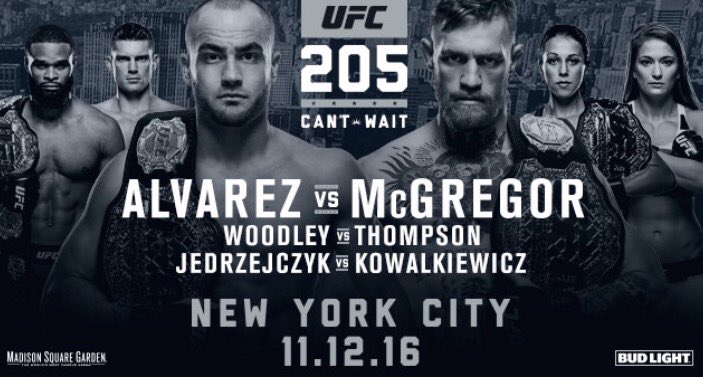 This fight is definitely worthy of a main card spot but due to the stacked fight card of UFC 205, it’s on the undercard.  Stephens has KO power and seems to be trending up.  Edgar, a former UFC Champion, has only lost to Jose Aldo (twice) in the past few years.

Edgar is a supreme technician and should avoid the big shots Stephens will try to deliver.  Look for Frankie Edgar to stay busy in this fight and win a decision.

Nurmagomedov is undefeated and should be fighting for a title at UFC 205.  Instead he gets a good fighter Michael Johnson.  Khabib is outstanding on the ground.  Johnson will hold off a takedown for awhile but Khabib will get him to the ground and submit him.

Boetsch knocks people out but seems to be fading lately.  Natal would be best suited to take this fight to the ground.  Boetsch will go for the KO and try to keep the fight standing.  Look for Natal to push the pace and keep Boetsch on his heels.  Natal wins by decision.

Luque was a late fill in after Lyman Good was removed from the card.  How will Luque do with only three weeks to cut weight and prepare for an opponent?

Muhammed is well balanced but will be wise to use his wrestling skill in this fight.  He will want to take Luque down to avoid the dangerous striker.

Vicente Luque ends this quickly with a TKO.

This is a fight tough to predict as Alves has had trouble making weight before and is always worrisome at this new weight class.

Miller is a balanced fighter with tremendous experience.  Alves is a superior striker with frightening kicks.  The fight should be exciting.

If Alves has his weight cut under control, he should be able to land the strikes to control the fight.  Alves has been away from the Octagon for a year and a half.

If Miller makes it out of round 1, he wears Alves down and will win by decision.

A typical grappler versus striker match-up.  Carmouche has been waiting to fight for nearly a year.  Chookagian won her UFC debut in July.

Carmouche challenged Ronda Rousey in their UFC debut.  She won’t shy away from the big stage.  Even against a bigger opponent, I see Liz Carmouche winning a decision.

Tate returns to the cage for the first time since losing her belt at UFC 200.  Tate is experienced and well-rounded.  She knows this is a must win fight if she wants to get a title shot anytime soon.

Pennington has shown a lot of promise but this will be her toughest fight to date.  She’s got a bit of a size advantage on Tate and knows a win over her will get her a fight or two away from a title shot.

Tate coached Pennington on The Ultimate Fighter and they’ve trained together since so there shouldn’t be many surprised Saturday night for either.  Tate’s experience will be the difference.  Miesha wins by decision.

Former TUF winner, Gastelum has kept climbing the ladder.  Every opponent has been tougher than the last and it’s no different for him at UFC 205.  Coming off his win against former UFC Champion Johnny Hendricks, Gastelum faces a top contender in the biggest fight of his young career.

Cerrone is settling in at 170 pounds.  Originally he was supposed to fight Robbie Lawler, now he’s got Gastelum who will be a challenge.  Look for Cowboy to use his strikes to keep Gastelum from charging in for a takedown.

With a title shot on the line, I see Cowboy finding a way to outpoint Gastelum in a fight that could steal the show.  Cerrone by decision.

Weidman fights for the first time since being stopped by Luke Rockhold at UFC 194.  He’s great at putting combos together and will look to put on a show in front of his hometown crown.

Romero is undefeated in the UFC.  He’s a superior wrestler with KO power.  How much will he have in his gas tank Saturday night?  He tends to go all out early and fade later in the fight.

Weidman has shown he can handle a surge early after overcoming Vitor Belfort’s onslaught at UFC 187.  I think Romero will control the fight at the start, but Weidman will push him and show his outstanding striking as the fight goes on.  Chris Weidman wins by decision and gets a shot at the title he lost.

Two undefeated fighters collide for the straw weight title.  Joanna Jedrzejczyk has been one of the UFC’s most dominant champions.  Her striking is powerful yet precise.  She cuts opponents up.

Both fighters come from Poland and fought before as amateurs with Joanna being victorious.  Look for the same thing Saturday night as Joanna wins by TKO.

Woodley makes his first defense after his first round KO win over Robbie Lawler.  He enter this fight as a big underdog.  A collegiate wrestler at Mizzou, he’ll want to try to get this fight to the ground even though he has tremendous power in his hands.

Wonderboy Thompson has creative striking and great takedown defense.  He has been dominating the competition, finishing fights.

Wonderboy will have to avoid walking into a right hand of Woodley and use his tremendous striking ability to make Woodley stand with him.  Woodley will tire and Wonderboy will land a fight changing strike and leads to the ref stepping in.  Thompson by TKO.

It’s champion versus champion in the main event Saturday night at MSG.   McGregor fights at 155 for a belt after two non-title fights against Nate Diaz at 170 pounds.

McGregor is fighting at a more comfortable weight for him and brings great striking to the fight.  He can mix his punches, kicks and elbows to impose his will against the opposition.  He’s fighting to become the first UFC Champion in two weight classes simultaneously.

Alvarez gained the belt with an impressive finish against Rafael Dos Anjos.  He’s a great wrestler with power punches.  He’s been in tough fights and matches up extremely well with McGregor.

Alvarez will be happy to stand with McGregor and slug it out but knows the advantage will be when he can get McGregor on his back. Alvarez will try to pressure McGregor with takedowns and keep him going backwards, knowing McGregor could tire.

Alvarez wins by decision in an epic five round fight.

After a disappointing UFC 200, the UFC looks for redemption with this tremendous event on Saturday night.  Watch it.

Sign up for UFC picks by email from SportsFormulator