Conor McGregor has transformed the UFC by becoming the league’s first two division champion with his UFC 205 win over then 155 pound champ, Eddie Alvarez.

After adding the 155 pound belt to his existing 145 belt, he announced he won’t fight again until mid-2017.  UFC President Dana White stated McGregor won’t fight before May 2017.  This leaves one belt in limbo for at least 6 more months.

While McGregor is the biggest star in the sport, the UFC needs active champions and allowing one belt to not be defended for perhaps a year (the 145 pound belt) is bad for the UFC. 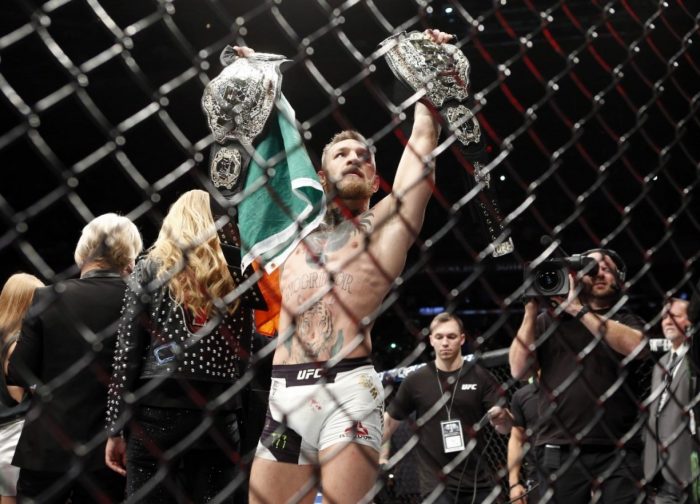 McGregor Can Do What He Wants

The biggest draw in the UFC, Conor McGregor can call his shots.  He can choose who, when and where he will fight.  He even wants a piece of the company now too.

For McGregor, nobody at featherweight (145 pounds)has the drawing power to pad his bank account.  At 155 pounds, there are great fighters deserving a title fight (Khabib Nurmagomedov and Tony Ferguson) but they’re not household names that can sell a pay-per-view and command the potential eight figure paydays McGregor wants.

If the UFC wants to revolutionize their league, they would trade Conor McGregor his lightweight and featherweight belts for a Open Division belt.

The UFC could create what would become a champions division where McGregor could move up and down to fight champions or high profile opponents.  This puts two other belts back in action as the featherweight belt could be put around the belt of a new champion and McGregor doesn’t have to worry about sticking to one weight class as a champion.

With an open division, McGregor can take fights at catch weights and challenge other champions in super fights.  This something the UFC had back before Dana White and the Fertitta brothers took it over with a Ken Shamrock vs. Dan Severn super fight at UFC 6.

For McGregor, he’s looking at three fights maximum in 2017 beginning in May.  He can use 2017 to cement his superstar status with super fights against other UFC Champions.

This would feature the 170 pound champion Woodley fighting the 155 pound champion at 170.  For McGregor, it’s a major step up as Woodley would probably enter the Octagon above 190 pounds for the fight.  Will his power sleep 170 pound fighters?  What if Woodley lands his power-packed right hand?  The intrigue for this fight would be off the charts.

Cruz, the Bantamweight champ, only has one blemish on his record and is such a tactician.  His footwork and pace could bother McGregor and keep the Irishman from landing that left hand.  McGregor, being the bigger fighter with KO power, would be the favorite but seeing another champion vs. champion fight would be one of the UFC’s biggest fights even.

The next fight could be a trilogy with Nate Diaz.  With each holding a winner over the other, a big fight to sell is the third fight for the lightweight championship.  This is a fight that’s about guaranteed a minimum of 1.5 million pay-per-view buys and with these two headliners could get closer to 2 million.

With Conor and Nate fighting let’s say Memorial Day weekend 2017, what’s left for Conor after that?  Does he continue to fight up until he catches a beatdown?  If he loses, does he drop back to featherweight?

Conor McGregor is transforming the UFC.  He’s the biggest star they have ever had and can take it to new heights as an open division champion.  Make it happen UFC!