Welcome to part 3 of the SportsFormulator College Football Revolution!  As part of our four year anniversary, we release our plan to revolutionize college football and make it better than ever. 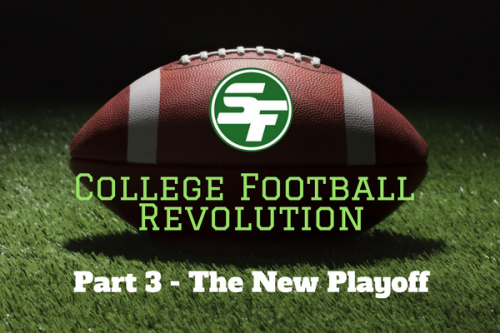 We’re just a few years removed from the BCS and while the College Football Playoff has made the postseason better, our new playoff system will make it even better.

The postseason will become better with set match-ups.  No longer will we need to worry about a committee to set the four teams in the playoff.  The match-ups will be set years in advance like the NCAA Tournament.

With a Power 4 set-up in college football, we can now know the four teams in the playoff (Sorry group of 5, you know you were long shots anyway).  Conference Champions will know square off in quarterfinal games and then advance to the National Championship.

For example, our year 1 College Football Playoff would feature:

This should trickle down to the lesser bowl games.  The teams that lose in their conference championship games should face-off.  This will add importance to the postseason as conferences will want to see how they stack up against one another.

The non-Power 4 conferences should get their shot at the big time programs so setting up many of the bowls to feature Power 4 vs. Non-Power 4 match-ups will make bowl season more interesting.

The NCAA needs to step it up and revolutionize the sport.  Make college football even better with our suggestions.

Part 1 – The Ultimate Realignment:  Death of the Power 5
Part 2 – Rescheduling