Welcome to part 2 of the SportsFormulator College Football Revolution!  As part of our four year anniversary, we release our 4 part plan to revolutionize college football and make it better than ever.

Now with a College Football Power 4 instead of Power 5, the schedules will provide more intrigue throughout the season.  The Power 4 will have to schedule fellow FBS teams. 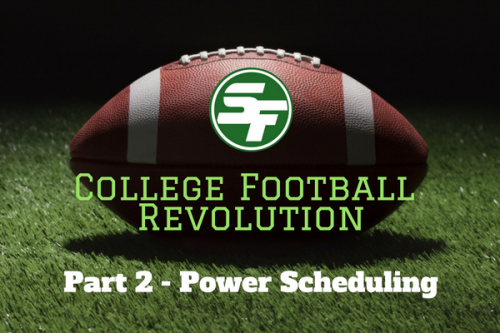 Gone are the days of FBS teams crushing FCS teams.  The Big Ten has already outlawed its member schools from scheduling FBS.  This will expand to cover the new Power 4 including ACC, Pac-12 and SEC.

Schedules will remain with 12 regular season games.  Week 1 every season will showcase “challenges” like we’ve seen for years in college basketball.

A Power 4 team will play its seven divisional foes, a team from each of the other three power conferences and can schedule two group of 5 opponents each season.

The conference challenges will take place the opening weekend of the season.  Games versus group of 5 teams will be restricted to one in the first four weeks and the other in the final four weeks of the season.

For example, in 2017, we will see the Pac-16 vs. Big Ten Challenge and ACC vs. SEC Challenge.  With these challenges, we would set-up four showcase games from each challenge which will be played in NFL stadiums over Labor Day weekend.

The showcase games will feature 2 teams from each division.  This will allow each school to rotate through per four years.

This will create epic opening weekends.  A sample of what you could see under this plan on Labor Day Weekend 2017:

Ohio State vs. Stanford on Thursday night in San Francisco

Washington vs. Wisconsin on Saturday afternoon in Indianapolis

Nebraska vs. Arizona State on Saturday night in Glendale, AZ

Texas vs. Michigan on Sunday night in Minneapolis

Virginia Tech vs. Oklahoma on Thursday night in Atlanta

Arkansas vs. Louisville on Saturday afternoon in Charlotte

Alabama vs. Miami on Saturday night in Tampa

Tennessee vs. Florida State on Monday night in East Rutherford

Intrigue will abound weekly in college football with this new scheduling format.  Making the power conferences play one another every season will create more fan engagement and bigger viewing audiences.

An example of the new scheduling for a Power 4 FBS team, the Arizona State Sun Devils.

Teams will be challenged week in and week out.  Schedules will become more balanced.  With our new playoff system (part 4), going undefeated will no longer be a priority to make the playoff.