Welcome to the weekend!

Justin Fuente has VA Tech in a good position.  This team is getting better every week.  Impressive win over Miami last night 37-16.

Will Aaron Rodgers come out another “relax” message to the Packers’ fans?  Even though they won, the Packers struggled in the first half before being able to pull away in the second half.

The weekend schedule is dominated by a massive SEC showdown as Alabama and Texas A&M collide.  Rarely will you see two undefeated teams playing the in the middle of the season where the spread is nearly three touchdowns.

For Jalen Hurts, its his chance to jump to the top of the Heisman race.  If the Alabama QB rips up the Aggies’ D, he will become the front runner.

Colorado at Stanford is the weekend’s most intriguing game.  The Buffs are surging while the Cardinal are stumbling.  For Colorado, this would be a big win for the program while for Stanford, a loss would have fans ready to write this season off.

Here’s our cheat sheet for the college football weekend:

Free Pick of the Week: UTSA -9.5 against UTEP in College Football

We were on the verge of the NFL’s biggest game of the season a week ago, but due to the loss of Ben Roethlisberger to injury, the Steelers vs. Patriots game has lost its luster.

The NFL returns to London on Sunday morning for the Rams vs. Giants.  I think it’s ridiculous the league continually takes games away from its fans.  If the league wants to know why ratings are down, their treatment of fans could be a big reason why.

Here’s our cheat sheet for the NFL weekend: 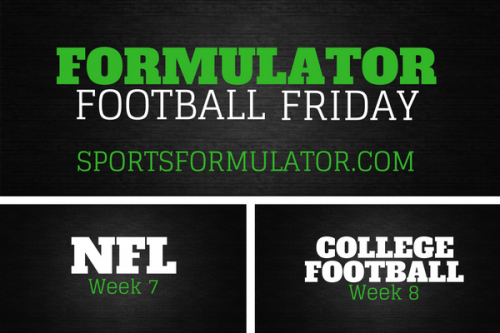