Welcome to part 1 of the SportsFormulator College Football Revolution!  As part of our four year anniversary, we release our plan to revolutionize college football and make it better than ever.

In part 1, we kill the Power 5.  There simply aren’t 5 power conferences in college football anymore.  This leads to a feeding frenzy as conferences make their move to strengthen their conference. 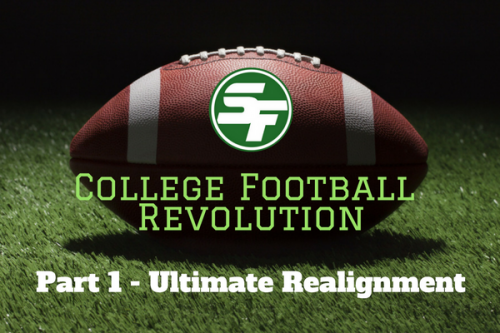 The Big XII conference is dead.  It has refused to become a power conference.  Their decision to not expand confirmed they want to be relegated to the “Group of 5”.  With just 10 teams, no conference championship and a refusal to expand have led to its demise and why it must die.

This leaves the 10 teams of the Big XII needing new homes if it wants to compete at the pinnacle of college football.

Birth of the Power 4

With the death of the Big XII, a Power 4 is now created consisting of the ACC, Big Ten, Pac-12 and SEC.  With 10 teams including crown jewels Oklahoma and Texas now in a dormant conference, the power 4 will swarm and try to woo them.

The Power 4 will lead to a major realignment as these four conferences expand to 16 teams consisting of two, eight team divisions.

Who Gets the Sooners?

If this turned into a draft amongst the Power 4 conferences, Oklahoma would be the #1 pick.  Where will the Sooners go?  The Big Ten likes to lead the way in expansion and would go hard after the Sooners.  The Pac-12 would love to take Oklahoma and be able to enter the Oklahoma/Texas market.  The SEC can fit Oklahoma right in geographically and welcome them to join other powerful programs like Alabama, Florida, LSU and Tennessee.

The SEC wins the Sooners sweepstakes.  This puts the SEC at 15 teams.  I think the Sooners make the conference take the rival Cowboys of Oklahoma State.  This will lead to realignment of the two divisions, East and West.

The Big Ten having lost out on Oklahoma, makes a move for the next best property in college football, Notre Dame.  The Fighting Irish will join the Big Ten with Kansas.  Both make sense geographically and can strengthen TV viewership.  Notre Dame will join Michigan and Ohio State in the Big Ten East.

The Pac-12 will need to become the Pac-16 so it has four teams to add.  It goes after a big property and significantly expands the conference’s footprint with the Texas Longhorns.  The Pac-12 will look to lockdown the West Coast by adding San Diego State, Boise State and UNLV.  Adding teams from tv markets like San Diego, Boise and Las Vegas will be a revenue boost.  The new divisions for the Pac-16 will be:

The ACC will need to add 2 and will be left scrambling after losing out on Notre Dame, who’s been playing five football games per season against ACC teams.

West Virginia makes sense geographically and will be looking for a new home to get away from the Big XII.  They will reach out and pluck UConn from the American Athletic Conference.  This will lead to creating a North and South Division in the ACC.

5 Teams Relegated to Group of 5

With this major shakeup in college football, some Big XII teams will be left out of the new Power 4.   Baylor, Iowa State, Kansas State, TCU and Texas Tech will be left scrambling for a new home.  They’ll be left to try to join group of 5 conferences.