It’s Friday and that means a weekend full of football awaits us!  We’re in the second half of the 2016 college football season and the midpoint of the NFL season.  Teams now begin jockeying for position.

College football teams are either making their push to a birth in the conference championship or trying to get bowl eligible.

In the NFL, teams are focused on staying healthy and trying to win to separate themselves from the pack.  19 of the 32 NFL teams have 3 or 4 wins at this point in the season. 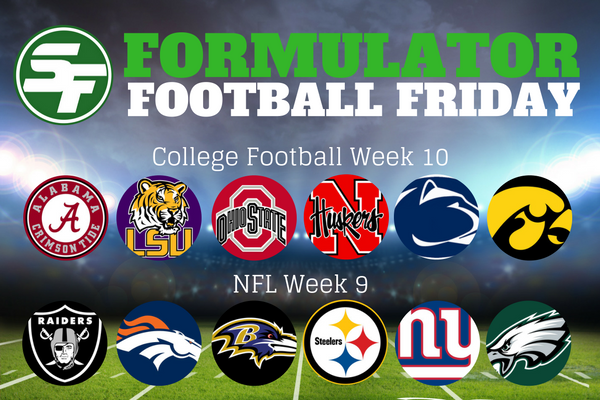 One of the biggest games of the season is Saturday night as Alabama and LSU collide.  Ed Orgeron has had LSU playing great since taking over earlier in the season but will face his biggest test in a Crimson Tide team that has only been challenged into the fourth quarter once this season.

In the Big Ten, Nebraska and Ohio State battle in what could be a conference championship game preview.  Iowa and Penn State play on Saturday in a game where Penn State can keep trying to hang in the race for the Big Ten East.  Their win over Ohio State has them in the running for the division crown.  They can’t let up against an Iowa team that is trying to make it back to a Big Ten Championship game.  This week’s Free Pick is Iowa +7.5.

Who wins this weekend?  You can see in our week 10 college football predictions.  Make your own picks for Saturday’s games in our College Football Survivor contest.

As part of our anniversary last weekend, I published my 3 part series called the College Football Revolution.  It has three improvements I’d make for college football to get even better.

Read the 3 parts:
Ultimate Realignment: The Death of the Power 5
Power Scheduling
The New Playoff

The College Football Playoff committee released their rankings this week.  The formula predicted the semi-final match-ups and then the national championship.  See who would win if the playoff were this weekend.

This week of the NFL saw a bit of a shocker as Norv Turner resigned as offensive coordinator of the Vikings.  The Vikings would be the two seed in the NFC if the playoffs started this weekend.  This news broke after I’d made this week’s NFL survivor pool pick.  We’re at the point in the season where it gets much more difficult to make the survivor pick but we found a team that fit the criteria and we’re staying with it.

The AFC West is looking like it has three solid playoff contenders in the Chiefs, Raiders and Broncos.  All three would be in the playoff this week.  How would they do?  You can see in our NFL Playoff predictions for this week.

The NFC East has a big match-up as the Giants host the Eagles.  Both need the win to stay within reach of the NFC’s best Cowboys.

Who wins in week 9?  Get our NFL predictions now and make your own picks in this weekend’s NFL Survivor contest.

Get Formulator Football Friday delivered to your email